Whenever you define a new class, you also create a new type with the same name. So way back in Section 1.4, when we defined the class Hello, we created a type named Hello. We didn’t declare any variables with type Hello, and we didn’t use new to create a Hello object. It wouldn’t have done much if we had – but we could have!

In this chapter, we will define classes that represent useful object types. We will also clarify the difference between classes and objects. Here are the most important ideas:

One common reason to define a new class is to encapsulate related data in an object that can be treated as a single unit. That way, we can use objects as parameters and return values, rather than passing and returning multiple values. This design principle is called data encapsulation.

We have already seen two types that encapsulate data in this way: Point and Rectangle. Another example, which we will implement ourselves, is Time, which represents a time of day. The data encapsulated in a Time object are an hour, a minute, and a number of seconds. Because every Time object contains these data, we define attributes to hold them.

Attributes are also called instance variables, because each instance has its own variables (as opposed to class variables, coming up in Section 12.3).

The first step is to decide what type each variable should be. It seems clear that hour and minute should be integers. Just to keep things interesting, let’s make second a double.

Private instance variables help keep classes isolated from each other so that changes in one class won’t require changes in other classes. It also simplifies what other programmers need to understand in order to use your classes. This kind of isolation is called information hiding.

Here is an example constructor for the Time class:

This constructor does not take any arguments. Each line initializes an instance variable to zero (which in this example means midnight).

The name this is a keyword that refers to the object we are creating. You can use this the same way you use the name of any other object. For example, you can read and write the instance variables of this, and you can pass this as an argument to other methods. But you do not declare this, and you can’t make an assignment to it.

A common error when writing constructors is to put a return statement at the end. Like void methods, constructors do not return values.

To create a Time object, you must use the new operator:

When you invoke new, Java creates the object and calls your constructor to initialize the instance variables. When the constructor is done, new returns a reference to the new object. In this example, the reference gets assigned to the variable time, which has type Time. Figure 11.1 shows the result. 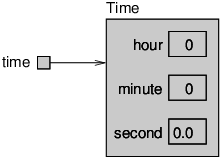 Like other methods, constructors can be overloaded, which means you can provide multiple constructors with different parameters. Java knows which constructor to invoke by matching the arguments you provide with the parameters of the constructors.

It is common to provide a constructor that takes no arguments, like the previous one, and a “value constructor”, like this one:

To invoke this second constructor, you have to provide arguments after the new operator. This example creates a Time object that represents a fraction of a second before noon:

Overloading constructors provides the flexibility to create an object first and then fill in the attributes, or collect all the information before creating the object itself.

Once you get the hang of it, writing constructors gets boring. You can write them quickly just by looking at the list of instance variables. In fact, some IDEs can generate them for you.

Pulling it all together, here is the complete class definition so far:

For example, here’s a new class called TimeClient, because a class that uses objects defined in another class is called a client:

If you try to compile this code, you will get a message like hour has private access in Time. There are three ways to solve this problem:

The first choice is appealing because it’s simple. But the problem is that when Class A accesses the instance variables of Class B directly, A becomes “dependent” on B. If anything in B changes later, it is likely that A will have to change, too.

But if A only uses methods to interact with B, A and B are “independent”, which means that we can make changes in B without affecting A (as long as we don’t change the method signatures).

So if we decide that TimeClient should be able to read the instance variables of Time, we can provide methods to do it:

Methods like these are formally called “accessors”, but more commonly referred to as getters. By convention, the method that gets a variable named something is called getSomething.

If we decide that TimeClient should also be able to modify the instance variables of Time, we can provide methods to do that, too:

These methods are formally called “mutators”, but more commonly known as setters. The naming convention is similar; the method that sets something is usually called setSomething.

Writing getters and setters can get boring, but many IDEs can generate them for you based on the instance variables.

If you create a Time object and display it with println:

When Java displays the value of an object type, it displays the name of the type and the address of the object (in hexadecimal). This address can be useful for debugging, if you want to keep track of individual objects.

To display Time objects in a way that is more meaningful to users, you could write a method to display the hour, minute, and second. Using printTime in Section 4.6 as a starting point, we could write:

The output of this method, given the time object from the previous section, would be 11:59:59.9. We can use printf to write it more concisely:

Every object type has a method called toString that returns a string representation of the object. When you display an object using print or println, Java invokes the object’s toString method.

By default it simply displays the type of the object and its address, but you can override this behavior by providing your own toString method. For example, here is a toString method for Time:

The definition does not have the keyword static, because it is not a static method. It is an instance method, so called because when you invoke it, you invoke it on an instance of the class (Time in this case). Instance methods are sometimes called “non-static”; you might see this term in an error message.

The body of the method is similar to printTime in the previous section, with two changes:

Now you can call toString directly:

Or you can invoke it indirectly through println:

We have seen two ways to check whether values are equal: the == operator and the equals method. With objects you can use either one, but they are not the same.

Figure 11.2 is a state diagram that shows these variables and their values.

The assignment operator copies references, so time1 and time2 refer to the same object. Because they are identical, time1 == time2 is true.

But time1 and time3 refer to different objects. Because they are not identical, time1 == time3 is false.

By default, the equals method does the same thing as ==. For Time objects, that’s probably not what we want. For example, time1 and time3 represent the same time of day, so we should consider them equivalent.

We can provide an equals method that implements this notion of equivalence:

equals is an instance method, so it uses this to refer to the current object and it doesn’t have the keyword static. We can invoke equals as follows:

Many objects use a similar notion of equivalence; that is, two objects are equivalent if their instance variables are equal. But other definitions are possible.

To demonstrate the difference, we’ll do both. Here is a rough draft that uses the static approach:

And here’s how we would invoke the static method:

On the other hand, here’s what it looks like as an instance method:

Optionally, you could replace t2 with that. Unlike this, that is not a keyword; it’s just a slightly clever variable name.

And here’s how we would invoke the instance method:

That’s all there is to it. Static methods and instance methods do the same thing, and you can convert from one to the other with just a few changes.

Here is a better version of add:

It’s still possible that hour may exceed 23, but there’s no days attribute to carry into. In that case, sum.hour -= 24 would yield the correct result.

This implementation of add does not modify either of the parameters. Instead, it creates and returns a new Time object. As an alternative, we could have written a method like this:

The increment method modifies an existing Time object. It doesn’t create a new one, and it doesn’t return anything.

In contrast, methods like add are called pure because:

Methods like increment, which breaks the first rule, are sometimes called modifiers. They are usually void methods, but sometimes they return a reference to the object they modify.

Modifiers can be more efficient because they don’t create new objects. But they can also be error-prone. When objects are aliased, the effects of modifiers can be confusing.

To make a class immutable, like String, you can provide getters but no setters and pure methods but no modifiers. Immutable objects can be more difficult to work with, at first, but they can save you from long hours of debugging.

The code for this chapter is in the ch11 directory of ThinkJavaCode. See page ?? for instructions on how to download the repository. Before you start the exercises, we recommend that you compile and run the examples.

At this point you know enough to read Appendix B, which is about simple 2D graphics and animations. During the next few chapters, you should take a detour to read this appendix and work through the exercises.

Review the documentation of java.awt.Rectangle. Which methods are pure? Which are modifiers?

If you review the documentation of java.lang.String, you should see that there are no modifiers, because strings are immutable.

The implementation of increment in this chapter is not very efficient. Can you rewrite it so it doesn’t use any loops? Hint: Remember the modulus operator.

The point of this exercise is to practice the mechanical part of creating a new class definition and code that tests it.

Exercise 4   Write a class definition for Date, an object type that contains three integers: year, month, and day. This class should provide two constructors. The first should take no parameters and initialize a default date. The second should take parameters named year, month and day, and use them to initialize the instance variables.

Write a main method that creates a new Date object named birthday. The new object should contain your birth date. You can use either constructor.

The purpose of this exercise is to write a class definition that includes a variety of methods, including constructors, static methods, instance methods, modifiers, and pure methods.